Posted at 09:26h in General News by ulidintadmin
Share

This Article was written as a joint effort by Ulidia Integrated College, Carrickfergus in Northern Ireland and Lycee Pole, Fort Dauphin in Madagascar.

Eighty percent of the people in Madagascar are farmers. In the southern region of Madagascar there are several neighbourhoods that produce coffee. We are investigating coffee production in the village of Belavenoka and through interviewing coffee farmers.

We surveyed the villages of Belavenoka and Tsiharoa which are in the Mahatalaky commune and Anosy region. All the people living in these villages have their own coffee and the traditional culture means that the coffee trees they grow have been there for a long time. According to local planters, they do not yet use specifically purchased seeds and when harvesting the coffee they leave some ripe coffee beans to the side replanting. The beans are then crushed to separate the grains (seeds) from the skins. They dig a hole and leave it to dry in the sun, the inside of the holes are well prepared for the coffee to grow well and the soil allowed to aerate for a week before planting. In the meantime, the soil must be prepared and fertilizer is not necessary. Coffee will not grow if the topsoil is dry, shade is important and the ground well watered.

Coffee is grown during the rainy season. Each producer can grow 50 – 100 individual coffee trees. The producers begin to harvest the coffee during the months of June to August, they remove the seeds and leave them to dry in the sun, they are then crushed with care to break the seed of the coffee but not smash it.The producers will take the coffee to market day in the rural town of Mahatalaky to sell. 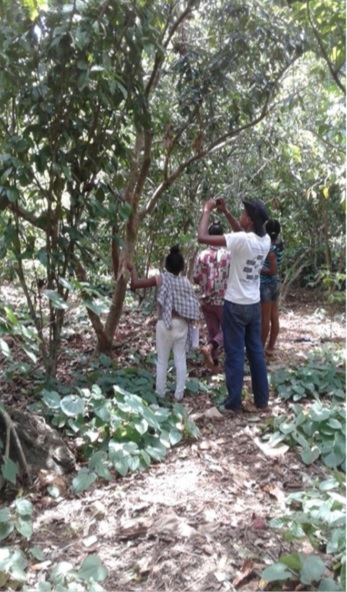 Production is much harder if there is no rain, consequently the coffee does not grow well and according to one of the producers we talked to, 50 of his coffee trees can produce 200 cups of coffee beans. Coffee growers are in a way victims because of the poor prices offered by the collectors, farmers need the cash income, and often have no choice but to accept the price offered to them for their products, even if it is not to their liking. The collectors will then sell the same coffee products in town at a much higher price and by comparing the prices from the producing area of 1,000 Ariary and the prices in town of 1,500 Ariary we can see that in town the cup of coffee beans can cost up to 500 Ariary more than the producers received.

Most products sold in the supermarkets in Northern Ireland are from exploitive commodities that gain a large proportion of profits while paying their suppliers from less economically developed country’s very little. This diagram shows that the farmer gets from the total profit made by a product. The farmer only received 3% of the total purchase price for all their hard work producing the product, whereas the retailer received 43%; we think that this is unfair!

Fair trade foundation is a worldwide organisation that works to make fairer sales prices for the famers that sell international commodities. They do this because it benefits the farmers and their communities allowing development and causing the farmers to be able to create infrastructure.

The fair trade mark is a symbol put on consumer produce labels that is indicates that they meet the specifications. This includes a fair price for the farmers. In 2009 farmers globally were £201m better off than the year 2000 because of fair trade payments.

Fair trade advantages include the workers getting more money for their labour. When the workers get more money, they can build a school for their community and children, by investing their money. Farmers who work for fair trade are protected while they work because chemicals are not allowed and safety standards are very high to protect families. Fair trade allows equal job opportunities to local workers that may not always be available so that women have equal opportunities to employment. Women are treated fairly within fair trade co operations; which means that they can earn triple wages than they would expect in a non-fair trade farm within their community. This can create a positive multiplier effect within communities with more economic development following with education and services.

In 2010 Antrim became the first ‘Fair trade Borough’ in Northern Ireland. Antrim achieved this by focusing on four fair trade goals which are – The Council passed a resolution to support Fair trade and agreed to serve Fair trade products. Local workplaces, schools and community organisations support Fair trade and use products wherever possible. Media coverage & events organised to raise awareness and understanding of Fair trade across the community. As a school in County Antrim we have worked hard to achieve our ‘Fair Trade Aware’ award in 2016. 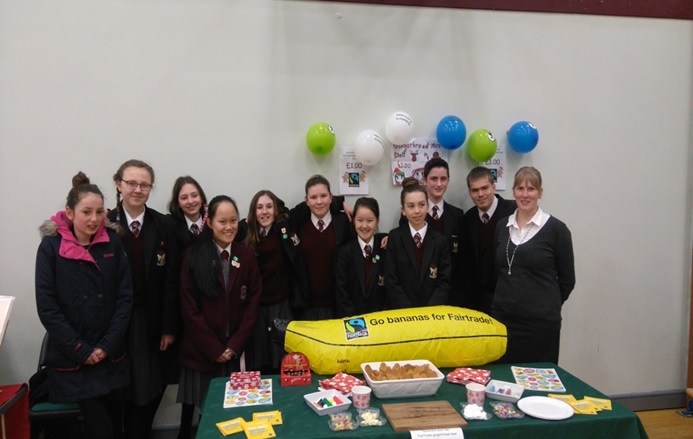 Ulidia Integrated College has established Fair Trade education programme within the school. This includes quizzes, for younger pupils of the school from 3 year groups. Competing pupils and their respective classes also had to research their local shops for Fair Trade products and the class winners from each of the 3 year groups. Within lessons learners have the opportunity to explore fair trade within Home Economics, Music, and Geography, lessons.

Our Eco-Team wanted to further promote our Fair Trade Awareness within our community by fundraising at our School’s Christmas craft fair. Each year in term one the eco team host a stall at the Christmas fair and we use this stall to provide an interactive gingerbread decorating activity. The children can decorate a biscuit and their parents are given information about fair trade and why it is worth a few extra pence.

Our school twinning programme between Northern Ireland and Madagascar is made possible thanks to the support of the Adsum Foundation. By working together to complete this article, we have gained a greater appreciation of the work which goes into producing items, which we take for granted in our local shops. If we pay a small amount more for a fair trade product, then we ensure that our friends in Madagascar are receiving a fair price for their labour in the production of the product.

The real cost of a chocolate bar